It’s been a productive day, better weather than yesterday and a chance to get outside in my local area and practice more plein air painting, sketching in oils (water mixable) on a small board.

My focus at present is on getting accustomed to the ergonomics of my portable painting setup and on loosening up my painting in a more energetic and playful spirit , letting go of the restrictive urge to try to produce perfection that has so often tightened up my paintings and driven me to over-work them.

I’m quite pleased with today’s effort. I overcame my Sunday inertia to get out and paint, dealt with a passing rain shower, as well as cold hands and an uncomfortable seat. I set myself an hour and kept to that limit.

This little stand of Birches and Bracken caught my eye in the warm afternoon sunlight and chilly south westerly breeze. I’ve always been drawn to the way the whitish bark contrasts against the darkness of other trees, the warm leaf colours defying both the shortening days and the efforts of the wind to dislodge them, holding on against the approaching winter.

I feel a restless energy, this evening, it’s still windy outside, I should be going to bed now but the urge to paint again is returning, after a long period of observing, reflecting, sketching, seeking inspiration from others in exhibitions, doing other things..

The most recent catalyst was spending time in the Van Goch Museum in Amsterdam, including a painting workshop, about which more in a subsequent post.

Since returning and diving back into a very busy time at work, with its own circumstances to drive my restlessness, I managed finally to start some acrylic sketching on Sunday night; just acrylic on brown parcel paper, the tone and texture of which are perfect as a mid-tone.

This evening, a quick and rough self-portrait study in a small mirror by poor light and using up the last paint in the palette …

I feel like something’s going on, a step forward, it feels to me…

Time to sleep, while the wind blows.

Monday was a contrast to the weekend. After a splendid couple of days in the mountains, camping in a wild place and achieving my objectives of ascending Ben Vorlich and Stuc a Chroin, I had a day at the Royal Scottish Academy in Edinburgh to visit the “Ages of Wonder” exhibition of Scottish art.

I had carried a small box of watercolours, some of the pans I’ve had since I was in my late teens, before the age of home computers, when the only mobile phones were on Star Trek! My plan had been to use them on the mountain but the combination of strong, cold wind and freezing air with the exhilaration and desire for movement meant that I only made a couple of quick pencil sketches from the summit.  It was only on the walk out, later on, that I was struck in the sunset by the glowing quality of the land and, more subtly, sky and attempted to capture something of this with the paints; partially successful.

Relaxing in cafes and in the gallery, I felt the urge to sketch and, later found the superb Greyfriars Art Shop, in Dundas Street, where I found both a type of palette that I’d seen in a demonstration recently and decided to try some new colours from tubes rather than pans, to allow me to use the paint in greater density than is easy with pans.  The same demonstration left me feeling re-inspired to explore watercolours again, for their qualities and also the relative ease of use in the typically awkward situations I end up painting in, even at home; it’s why I do not use oils, despite several people urging me to do so, it’s just not practical in my present situation.

It’s reminded me that I really enjoy sketching, both with pencil and pen, and like what can be achieved with watercolours, even if I have so far largely failed to get the kind of results I would really like.

Here are some of them.  I may write more in due course about the exhibition and my impressions of some of the works, but I have an early start in the morning and need to sleep soon… and there is a heap of dull but necessary paperwork to be sorted…. I hope for a stormy weekend in which to deal with it and leave me feeling I can play more freely… self-created inefficiency for which I alone am responsible. 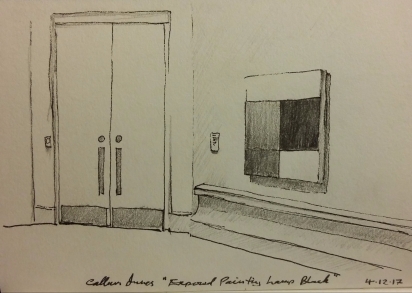 Contemporary in context, for me the painting made most sense in relation to the doors and the wall space.

Rose Street, from behind a pint at the Auld Hundred

It’s a funny, inconsistent Summer, which has felt busier than usual, for me; filled with a restless feeling of the need for change and clearing out. In this atmosphere of uncertainty and uneliability, I feel sometimes all I can do is stop and just look at things as they are now, without getting distracted along lines of inquiry; just look and draw or paint.

I’m on the last two pages of another sketchbook, ready to start a new one when I take a trip to the Netherlands in a few days’ time.

Here are some recent sketches: 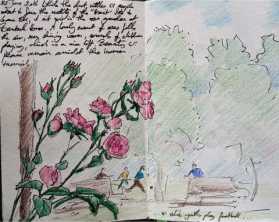 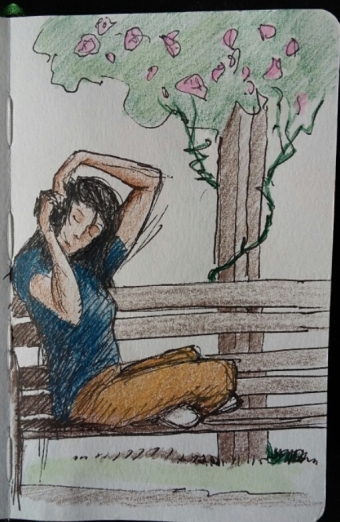 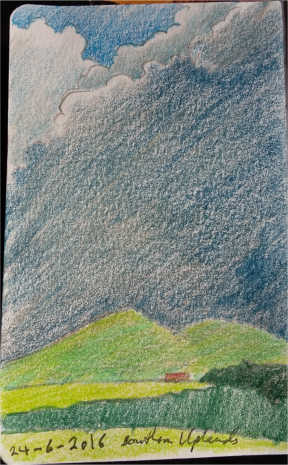 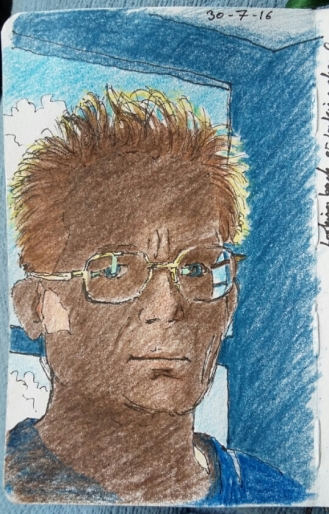 Looking back and ahead

There will be seeds in the wind

They are in a mix of ink, watercolour, coloured pencil.  I may work on ideas from some of these in due course.  The struggle, as always, is for me to retain the freshness of the sketch and to avoid over-working a more “finished” piece; work in progress, a lifetime’s worth!

I had a setback, just after Christmas, when I was admitted to hospital with abdominal pains that led to me having my appendix removed; very tidily via ‘keyhole’ surgery.
This forced me to stop everything for a while but it also provided me with an opportunity to try out media and subjects that I’ve neglected for too long. I set up a simple still life composition and picked up some old Conte pastel pencils that I was given many years back.

I had forgotten how pleasant it is to build up colours and tones slowly, without the urgency imposed by rapidly drying watercolour or acrylic paint. There is a pleasing feeling of control of the process with dry media that I find can help to deepen my observation of the subject. This is in turn beneficial when I decide to use paint.

My assortment of coloured pencils was not quite working for me though, each type had noticeably different characteristics, including the need for applying fixative, which I wanted to avoid.  I made the decision to clear out my stock, which I gave to the school art department for students to use, and invest in a new set of good quality coloured pencils. After trying a few different types out, I settled on the Koh-i-Noor Polycolour pencils, which have good quality colours and a nice softness without the powdery nature of pastel pencils.

So now I am starting to explore and play with these nice new colours, it brings back that feeling I had as a child, the joy of simply making marks and building up areas of colour, even just in little thumbnail trials, as here.

I’ll post more in a while, it’s too late to photograph the other sketches just now and I have started back at work.

Today I’ve been accompanying a visit by art students from the school to London and the Tate Modern. The long coach journey has limited our time there but they have still had an all-too-rare opportunity to see some influential and thought-provoking works. I will be interested to see, from the sidelines, what fresh ideas they bring into their work after this.
They are good, motivated and pleasant students and my role as ‘responsible (male) adult’ has been easy so far. Free of the burdens of teaching, I had the luxury of being able to make notes and sketches of my own and to use some reflection time to gain some ideas and even a few insights.
I like the Tate Modern, from its wonderful cathedral-like turbine hall to its range of exhibits and the wide range of :ordinary’ people visiting.
I found myself drawn to Mark Rothko’s deeply meditative ‘seagram murals. Ideas arose for me about colour and the responses that arise from immersing oneself in the experience of it. When I sit in front of these colossal canvases, I feel a deep calm that I encounter also in good meditation sessions. I also have a distinct feeling of a low, continuous, note, just on the edge of hearing. I ask myself why I have still not made my own attempt to work woth really bold colours, which I do use as base layers for my landscapes.
One of Joan Miró’s paintings also evoked something of this feeling for me, the deep blue field drawing me to stand as close as I was allowed and simply looking, feeling no need to imterpret or even ask questions, it was sufficient to spend time in the experience of the colour. Calm, nearly soporific, a feeling of deep space…. Was this the dream-like association referred to in the exhibition text?
Ideas sit, captured in the pages of my sketchbook and circulating in my mind.